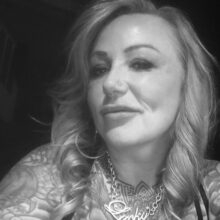 I started to pierce in 1996, with the help of my lovely cousin, tattooist Mandie Barber. She introduced me to piercer Nigel Knight who helped me with my initial questions.

I was then consumed, I ate, slept and breathed all aspects of body modification, gleaning what ever information I could from what ever source available, in those days there wasn’t Google so I would throw questions at anyone I met, medical professionals, metallurgists, engineers, other piercers and any one who I thought could enhance my skills. I decided to open Nala in 1997 – originally, Nala was solely dedicated to body piercing.

At that time there were very few dedicated body piercing studios, and I wanted to bring body piercing to the high street and show people that this was a body art form in its own right. The reputation of Nala grew, and it wasn’t long till we had to move premises to cater for this.

As my love for body modification grew so did my own tattoo collection, which led me to the tattoo studio IN2U London. Some of the world’s most renowned tattooists work there, owned and headed by the notorious Alex Binnie. Whilst getting my ink done Alex approached me to join the crew as their Senior Female Piercer, it meant commuting to London twice a week but I jumped at the chance, to work along side the guys at IN2U.

IN2U is a real melting pot of ideas and experience, and that’s just the customers. Whilst there I was approached to take part in a few Media productions on T.V and magazines, notoriously I was the ‘punishment’ on the game show ‘Distraction’ on channel 4.

It just seemed like a natural progression to learn to tattoo, and who wouldn’t with that kind of inspiration around you. So with grit and determination (and whatever spare time I had) I tattooed. I now tend to tattoo full time, but do still dedicate 1 day a week to my first love, piercing.

Health and Safety and professionalism in the industry have always been paramount to me. I’m always searching to advance my education where possible and I was instrumental alongside Nigel Knight and Mark Perry in setting up the not for profit organization The Association for Safe and Professional Piercing, mainly to promote health and safety awareness within the industry and to bring together anyone associated with it, tattooists, piercers, jewellery manufactures, medical suppliers etc, basically any one who gave a damn about the industry. We organized annual training seminars, which bought together the piercing community and gave everyone the chance to calibrate all their information and learn new things, and ignite new ideas.

I also attended Conventions organized by the American organization the Association for Professional Piercers, a huge organization who have seriously addressed issues within the industry. It was pretty cool too, conventions were held in Amsterdam and Las Vegas (oh my job is so hard!) Every time I returned from one of these conventions it was “right, were gonna do this”, “were gonna change that”, but that’s what its pretty much like at Nala. We’re always growing and changing, either to our needs or our customers.”

LIKES: Yoga (and Tattoos of course )
HATES: There aren't enough days in the week for me to do all the things i want to